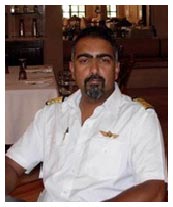 Capt. Puneet Bakshi is a 43-year-old Helicopter Pilot and has an experience of more than 4000 hrs of incident /accident free flying on all types of aircraft, including propellers, jets and helicopters, both Single Engine and Twins.

He has served in the Indian Air Force as an Officer and a Pilot for 17 years before retiring as Wing Commander. He has flown many military aircraft, including Indian trainers HJT 16 and HPT-32 , Russian Mi-8s and French Alloutte-III . He has also served as Director of Operations Room at Air HQ and handled many operations, including Disaster Relief, Search and Rescue involving 30 or more Helicopters and Aircraft.

He holds a valid CHPL since 2006, and is current on EC 155 B1 and AS 350 B3. He has more than 1500 hrs of High Altitude Mountain Flying experience and is cleared to fly as Captain for long line Survey (Fugro). He is endorsed on Alloutte III and Lama helicopters as well.

He was involved in Kargil Operations of 1999 and many other similar operations. He was one of the few pilots involved in saving thousands of lives in Kedarnath Disaster 2013.

He holds a BSc degree from JNU and an MBA in Marketing from Symbiosis College. He is an alumni of the National Defence Academy.

He has two daughters (twins) who adore him. He likes to spend his free time reading poems and pondering over how to change the world!!