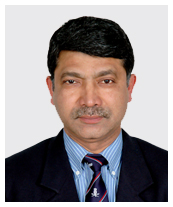 AVM Bordoloi is an ex-fighter pilot from the Indian Air Force. He has an experience of more than 5000 hrs of accident/incident free flying. He has flown various types of Military aircraft with the IAF including Hunter, Sukhoi-7, MiG-21, MiG-23, Avro and Chetak/Cheetah. Apart from being a Category A-2 flying instructor he was also an Air Force Examiner. He was awarded the Ati Vishistha Sewa Medal in 2006 for his contribution during the conduct of Disaster Relief Operations in Kashmir.