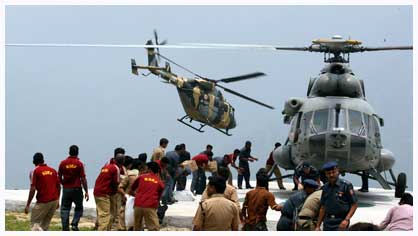 It is hard to understand why people like Puneet did what they did in Uttarakhand. Would we have done the same? The fact is heroes are heroes because they are exceptional people.

We live in a time when the term hero is usually only used ironically. I wonder what we lose in our imagination, and in our aspirations, when we dismiss heroism as something not to be taken seriously. A year ago a person I know, a friend, committed acts of bravery that are beyond the capability of most people. He is a helicopter pilot, a former Wing Commander of the Indian Air Force, who has been flying choppers for the last few years with private companies. Part of that involves trips to religious sites in the Himalayas, and Puneet has often told me how difficult it was for him to sometimes tell people that bad weather meant he could not fly them to a location that was the culmination of their lives.

Omair Ahmad is an author. His last book was on Bhutan

A year ago, Puneet was stationed just outside of Kedarnath, among other chopper pilots catering to the needs of the pilgrims. There had been warnings but nobody paid much attention to them, except for the helicopter pilots, whose lives depend on slight weather fluctuations. Puneet had flown over the areas on June 14 and had observed some of the bad weather conditions, but when he flew again on June 16, after two days of unrelenting rain, he saw that parts of Gaurikund town had been washed away, and all of the transit town of Rambada had been swept away. When Puneet tried to land near Garud Chatti, his chopper was almost mobbed by a desperate crowd whose only thought was of escape, and he had to scramble to save himself and his helicopter.

He came back, as did four other chopper pilots, all from the private companies that were operating in the area. They worked non-stop, with handlers pushing people back and lining them up so that they did not injure themselves or overload the helicopter. These pilots, assigned by nobody, using their own resources and risking their lives again and again, saved the lives of hundreds, maybe thousands, of people before the State authorities and the military arrived. Even then it took a while for the army choppers to start operating. Helicopters have about three hours of flight time for each trip due to their limited fuel tank, and it took half of that to just fly them in from Dehradun. The only fuel stocks near Kedarnath were those maintained by the private companies, none by the military.

One place, near where Rambada had been, offered an incredibly difficult landing. It was barely 30sq ft of space, and about 300 people had been stranded there for four days, surrounded by the dead, dying and desperate. Puneet dropped his handler, a Mr Bisht, who guided the chopper in, squatting on his haunches, rock steady, with the deadly whirling rotors just a foot away from his face. Puneet has served in all sorts of operations, including the Kargil conflict, but he said that of all the people he has worked with, he has rarely come across the courage that Bisht showed that day, as he guided the helicopter in. One tiny mistake by either could have led to their deaths.

It is hard to understand why people like Puneet, or Bisht or the other chopper pilots, did what they did in those days. Yes, we would all like to say that we would have acted in a similar manner were we in the same place, but I am not sure that is true. The fact is that heroes are heroes because they are exceptional people. Among the people that Puneet saw and rescued was a sadhu clutching a potli that contained more than Rs. 90 lakh, there were women carrying jewellery that was obviously not theirs, there were men who, after being rescued from near-death, wanted to pay so that they could fly to their homes leaving behind those still stranded, there were TV reporters who wanted to film the tragedy, uncaring of the fact that every additional reporter meant one less person rescued.

Puneet, the other chopper pilots and the handlers risked their lives day in and day out for people they did not know, some of whom were, no doubt, not great human beings. He told me how desperation had driven some people to wildness: “They were like animals, animals,” he said, talking about the events a couple of weeks afterwards, marvelling at how quickly people were reduced to their savage, atavistic urges. He attributed his actions to training, to a certain code that pilots have, the camaraderie among the other pilots who flew their machines, maybe even a sense of challenge that the conditions created, so that he had to risk his life to perform even a simple rescue mission. I guess there are always reasons and explanations for everything, and one of them is a very simple one. Wing Commander Puneet Bakshi acted as he did because he is a hero, and that is what a hero does.