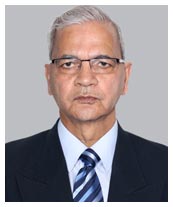 BABOO RAM BAKSHI (B.R. BAKSHI) has an experience of more than 40 years in various facets of power sector functions at plant site as well as corporate headquarters.

He is Chairman and Advisor of Whirl Works Aerial Private Limited, promoted and managed by Ex- Indian Air force officers for aerial works and other aviation services.

He is a Senior Advisor of Enginuity Consulting Private Limited (A collective of Chairman and Director level professionals with decades of experience in power sector).

He is a Member of Technical Advisory committee for HPGCL along with executive members from NTPC and Tata Power.

He is also an Independent consultant to power sector for improvement of thermal power plant performance, particularly thermal plants with steam turbines supplied from China.

From April 2009 to 2012 he was the Vice President (Engineering) in Gammon India EPC Power Division. He was involved in building up technical documentation, submission of tenders, technical discussions with customers, business development, visited sites where Franco Tosi machines are installed to study their performance and provide feedback to the manufacturer.

October 2006 to December 2008 he was the Advisor of EM Services and he dealt with servicing and troubleshooting of large steam turbines, including development, manufacture and assembly of turbine components of old turbines.

September 2004-06 he was a Consultant in BHEL Power Sector for performance testing of 500 MW sets, troubleshooting, failure analysis, rehabilitation, renovation and modernization of old power plants.

April 2003 to September 2004 he was an Advisor in NASL (an NTPC – Alstom, Germany JV) for renovation and modernization of old power plants.

July 2000- January 2003 he was an Executive Director in the Power Sector of Technical Services division of BHEL .He was directly responsible for monitoring the functioning of power plant equipment and systems supplied by BHEL. This division was also responsible for resolving customer complaints regarding plants and machineries supplied by BHEL, and resolution of
generic problems.

From 1970 to June 2000 he had various designations in BHEL where he experienced various aspects of power plant functions; concept to commissioning, O&M and renovation and modernization.

He completed his MSc (ENGG) Specialisation in steam and gas turbines (U.S.S.R—1968).

He likes to spend his free time in playing violin and contemplating metaphysics.